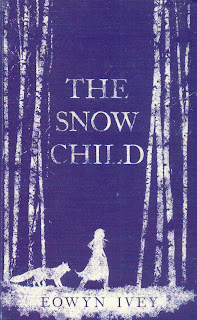 There are certain books that I pick up, read the first page, put down again and say "... damn."

Often, this is because the book is bad. Sometimes, though, it is because I have just read something so wonderful that I need time to come to terms with the fact that I did not write it. Reading the first page of The Snow Child by Eowyn Ivey made me shrivel up with jealousy like a thwarted fairy-tale witch. It is a masterclass in the vivid, tactile transmission of a scene - from the first sentence you're right there, totally caught up in the action and a paid-up member of Ivey's marvellous and slightly magic-realist world. And it just gets better from there.

The Snow Child is the story of Mabel and Jack, an aging couple who have never been able to have children. They're both slightly weird and introverted (an understatement in the case of Mabel, who begins the book suicidal and with a total distrust of all other human beings), and they've come to Alaska to start again all on their own. Jack won't even let Mabel do any of the farming, so she spends her days baking pies and thinking about death. They're at the lowest point in their lives when they go outside one night and on a random impulse make a snow sculpture of a little girl. The next morning they wake up to discover that the statue has been destroyed - and there's a child hiding in the woods next to their house.

You can probably tell where this one is going. But the clever thing about Ivey's story is that some of her characters know it too. As the couple befriend the little girl, Mabel becomes obsessed with the idea that they've made their own snow child who, like the girl in the story, will melt in the spring: essentially, she believes that she's stepped into her own fairy tale. It's a clever idea, done delicately enough to make the reader genuinely unsure what's real and what's a myth in the universe of the novel. Even better, Ivey has split The Snow Child into three different sections in which she plays with three different versions of the basic Snow Child story, each similar to but subtly unlike Jack and Mabel's experiences with their girl from the woods. It's a nice comment on the essential differences as well as the similarities of each retelling of the same fairy tale.

Nothing truly fantastic ever happens in The Snow Child. The little girl's presence in Jack and Mabel's back yard has an explanation; she is certainly not made of frozen water. But at the same time, Ivey always leaves a little gap for conjecture. The snow child is a real person, living in the real world... but she can still summon a snow-storm with her mind. Maybe. Or maybe she can't. It's never entirely clarified, and that leaves the reader beautiful blank space to decide what they think.

Ivey's Alaska is wonderful in the literal meaning of the word: she is so good at conveying the wonder and beauty of the wilderness that surrounds her characters without turning it into a twee little snowy cottage garden. But even though it's got a gorgeous, out-of-the-ordinary backdrop and a weird central character, The Snow Child is really all about how exceptional everyday life can be. Sure, it's got a kid who might have unearthly powers, but its real magic comes from the relationships that are built up between the characters.

I know, that sounds really sugary and awful, as though the characters spend all their time crying and hugging each other and discovering their purpose in life. But while that does literally happen (the discovery, not the crying and hugging), Ivey does it in a really organic, sensible way. The snow child gives Jack and Mabel the chance to experience a version of parenthood; their nutty next-valley-over neighbours let them discover how nice it can be to have friends. It's sweet, but realistically so, a kind of wish-fulfilment that makes sense.

I'm aware that I'm raving about The Snow Child. But it's not often that I'm seized with the need to go online and find out how many awards a novel has won because I'm so convinced that it needs ALL THE PRIZES. This is an interesting story, yes, but what really makes it stand out is how gloriously good its writing is. A rational fairy tale with a spice of magic to it, it's so much more unusual and interesting than a totally mystical or completely factual retelling. I can't recommend this enough.

Robin Stevens
Girl, 26, book reader, book writer, book reviewer, book lover. Repped by Gemma Cooper at the Bent Agency. My first book, MURDER MOST UNLADYLIKE, will be published by Corgi in the UK in May 2014, and in the USA by Simon & Schuster Books for Young Readers in spring 2015.

The bird is on Goodreads:

This work by Robin Stevens is licensed under a Creative Commons Attribution-NoDerivs 3.0 Unported License.