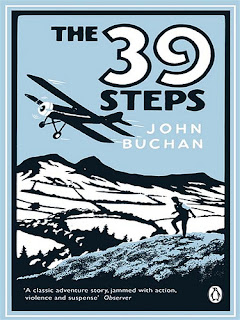 On a glamorous, living-in-London whim I booked tickets to see The 39 Steps a few days ago. Only after the fact did it occur to me that I may have never actually read the novel the play is based on. (It is difficult to be entirely sure because every single jolly adventure yarn written between 1850 and 1920 is in fact the same book. The settings change, as do the hats and moustaches of the characters, but the fight for good old Crown and Empire is everlastingly recycled).

So there I was, reading The Thirty-Nine Steps (it is a sliver of a thing, it took me all of a day to get through), and on page 16 one character turns to another and starts casually slandering Jewish people, and I realised with heaviness in my heart that The Thirty-Nine Steps (first published in 1915) suffers from the same knotty issue as do most other ripping yarns I have read. It is deeply and horribly racist.

And this, of course, is a problem for a reader in 2011. It's not only that it's academically unpopular, at the moment, to read this sort of book. Postcolonialism is (in scholarly circles) where it is at, and ripping yarns tend to be full of sunburned men in topis taking wild potshots at elephants and black people (these being held in roughly the same estimation in the mind of the shooter). But, of course, it's much more than a matter of academic taste. The views in these books are seriously offensive to huge sections of society - and so if you do read things like King Solomon's Mines and The Thirty-Nine Steps and end up enjoying them despite their moral content, are you essentially colluding in racism? Does it make you a bad person?

I'm not sure I have the answer to this, but it is something I wonder about a lot, because the ripping yarn genre has always completely fascinated me. Do not get me wrong, I am so glad that I live in a world where saying things like "Those bally insolent darkies ruin everything! Where is my boy, so that I may beat him?" will get you glared at and then swiftly arrested, but I can't help but be amazed by, and curious about, by the attitudes that show through in books like The Lost World and Journey to the Centre of the Earth. 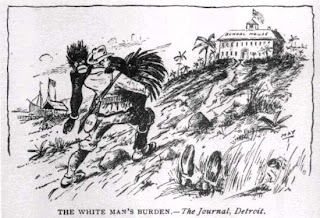 Chinua Achebe famously decided that Heart of Darkness is irredeemably racist because (among other things) it uses the word 'nigger', but while that may be true if you read it by the standards of today, it sort of misses the point. Heart of Darkness comes from a world that can't really be judged by the morals of the 21st Century. You can't even be racist in the way a 21st Century person would understand racism. Truly good people by the standards of the story, characters who you are meant to totally believe in, beat up their black bearers as much as anyone else, or turn around and cheerfully spew the most astonishing racial invectives, and there's no sense that this might be even the slightest bit morally dubious.

I think part of what interests me so much is trying to get my head around the thought that, less than 100 years ago, a large majority of white Europeans genuinely believed that most of the rest of humanity were just about as important as tigers, maybe, or camels (and definitely less worth bothering about than horses or dogs). Not that white supremacy doesn't still exist today, of course it does, but today's white supremacists are generally angry at or frightened of people who do not happen to look like them. The characters in most ripping yarns just don't care enough about the other races they come across to be angry at them. In their view of the universe, black people truly don't matter.

Better to be black, though, than Jewish. In The Thirty-Nine Steps, one white character turns to another white character and says that he has decided to trust him because (and I am quoting here) "you're a white man". I had to read that sentence about three times before I properly realised that he's not just stating the bleeding obvious. What he means is, "you're a good man". White, you see, is right, but you have to be the right sort of white. The Enemy are the wrong sort of white, because they are foreign, but even The Enemy are preferable to The Jews, who have committed the crime not only of being foreign but also of being in disguise - they are essentially black people, but ones who are nefariously pretending to be white men in order to get all the money in the world into a big pile and sit on it.

If the anti-black rhetoric in adventure yarns tends to be alarmingly casual and disgustingly condescending, but not particularly hate-filled, the stuff levelled against Jewish people more than makes up for it. The anti-Semitic sentiment in not only adventure stories but almost all genres of novel, pre-World War Two, is astonishingly violent, and moreover seems to come from a really heartfelt place. A very long list of writers seemed to genuinely believe that if white people relaxed their vigilance, even for a second, The Jews would come sneaking up behind them and STEAL ALL THEIR GOLD AND WOMEN. And out of that came passages like this little gem in The Thirty-Nine Steps, the description of


a little white-faced Jew in a bath chair with an eye like a rattlesnake. Yes, sir, he is the man who is ruling the world just now, and he has his knife in the Empire of the Tzar, because his aunt was outraged and his father flogged in some one-horse location on the Volga.

That's vicious, horrible stuff - and the sort of thing, of course, that got Hitler into power fifteen years later. I bet John Buchan would have hated the idea that he had anything in common with a Rascally German, and there's a mean part of me that hopes he had some sleepless nights over it. But of course, he didn't - anti-Semitism was A Thing in Britain in the 1920s and 30s (and eugenics, too, which they tend to gloss over in GCSE History lessons).

So when you read those sentences, vile though they are, you're looking at a product of a certain time - most definitely a worse time, if you happened to be anything other than a (white) white man - but one with a completely different moral landscape. Even though you may instinctively want to, you can't judge an outburst like that the way you would if someone you knew turned round to you tomorrow and started expressing the same sympathies. 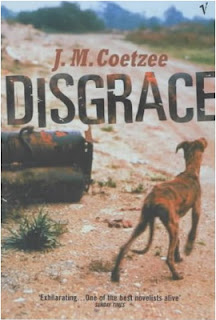 And that brings me to something else I've also read recently, Disgrace by J. M. Coetzee. It's a novel that is, incidentally, quite sensitive about racial issues, but its protagonist, college professor David Lurie, begins the action by having what is not only a disturbing but also a borderline illegal relationship with his student, a girl thirty years younger than him. At one point he coerces her into his bed and engages in a sexual act that is described as


Not rape, not quite that, but undesired nevertheless, undesired to the core.

Ah yes. Not quite rape. My favourite.

David loses his academic post over it, but decides, infuriatingly, that he has done nothing truly morally wrong - on the contrary, he has been 'enriched' by the experience. Of course, this could be the views of one character, and nothing to do with the author, but there's such a fuss made about love in old age (he did it for love! For love!) that I have a nasty feeling that this isn't the case. In fact, there's a very dodgy attitude to women in general running through the novel - about half way through it I was brought up short by this interesting aside:


Sapphic love: an excuse for putting on weight.

Now, compared to dangerously insane Jewish conspiracy theories, all of this isn't so bad. But all the same I found it incredibly bothersome, almost more so than that passage from The Thirty-Nine Steps, and I think that's because of when it was written. Disgrace won the Booker in 1999, which means it's recent enough that it ought to have known better. I'm fairly sure that by 1999 the concept of not being an asshole towards women was fairly widely understood, so the fact that Coetzee goes ahead and does it anyway says quite a lot about him as a person.

Offense, of course, is purely personal, and each person has the absolute right to be upset by anything they come across. But I do think that there are some things that you have to let writers from certain time periods get away with, purely to prevent yourself going insane with helpless rage. I also think it's important to read books from different periods that are offensive to us today, if only to remind ourselves how comparitively recently their kind of poisonous beliefs were the norm.

And finally I think that J. M. Coetzee may not be a racist, but all the same I wouldn't want to be in the same room with him. He's sad, annoying proof that society's morals may have come a long way since 1915, but they've still got a long way to go.
Posted by Robin Stevens at 12:45

Robin Stevens
Girl, 26, book reader, book writer, book reviewer, book lover. Repped by Gemma Cooper at the Bent Agency. My first book, MURDER MOST UNLADYLIKE, will be published by Corgi in the UK in May 2014, and in the USA by Simon & Schuster Books for Young Readers in spring 2015.

The bird is on Goodreads:

This work by Robin Stevens is licensed under a Creative Commons Attribution-NoDerivs 3.0 Unported License.